The Brothers of the Sigma Mu Mu of Loudoun County, VA Chapter of the Omega Psi Phi Fraternity’s mission is to diligently serve the community in which they live, work, worship, and socialize. To accomplish their mission, Sigma Mu Mu (ΣΜΜ) will do their duty according to the ideals of our Founders which began nearly a century ago and hold true that “Friendship is Essential to the Soul”… 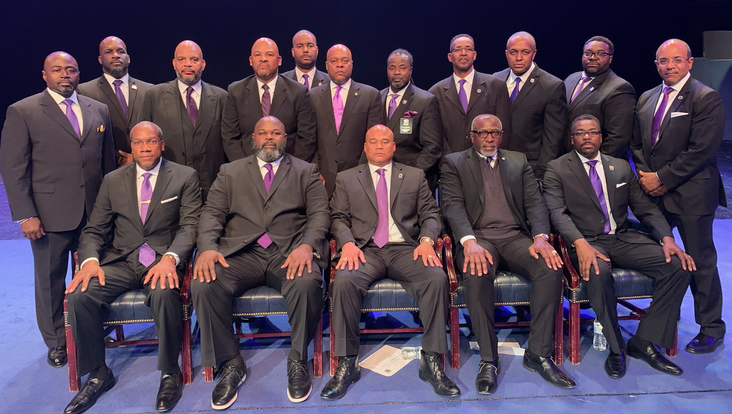 On November 17th 2010, four Omega men living in Loudoun County, VA (Bro. Cordell Charleston, Bro. David Henry, Bro. Shawn Lacey, and Bro. Michael Williamson) met at The Dock, local establishment, to celebrate Founder’s Day. During this fellowship, the Brothers discussed their love for Omega and the possibility of starting a chapter in Loudoun County. They wondered whether there were other Brothers in Loudoun County that felt the same way. The four Omega men continued to fellowship and eventually, they received the answer. May 2011 Sunday May 1st, Brothers Cordell Charleston, David Henry and Shawn Lacey met with Third District Northern Area II Supervisor Ricardo Sewell to discuss the requirements for the formation of a chapter in Loudoun County. Wednesday, May 11th, Brothers Michael Bennett, Cordell Charleston, David Henry, Ald’win Humphrey, Shawn Lacey, Michael Lipscomb, J. Kevin McIntyre, James Moore, Rodney Moore, Leroy Ross, Ricardo Sewell, and Michael Williamson met to form an exploratory committee to begin the pursuit of a chapter. Over the next 4 weeks, these Brothers would meet every Monday to discuss the requirements of the nationally mandated programs and the structure of their business plan. The number of Brothers grew from 12 to 28. A few prominent members of the fraternity were invited to attend a few of the exploratory sessions. Brother Bob Lewis (former Third District Representative) provided advice and encouragement to forge ahead. He also made a recommendation to Brother Curtis A. Baylor Grand Keeper of Records and Seal that he should come out and attend one of the exploratory meetings. While in attendance, Brother Baylor advised the exploratory committee that he fully supported the formation of a Loudoun County chapter and further added that he would make it known to the Third District Representative, Brother Anthony Knight. Upon learning of the exploratory committee’s desire to form a chapter in the community in which members lived, worked, and worshiped in; Brother Anthony Knight advised the exploratory committee via Brother Ricardo Sewell. He informed the committee members of the requirements necessary to move forward towards the formation of the chapter. Specifically, he requested several key items:

At this point, the exploratory committee no longer considered themselves to be an exploratory committee. The members began to recognize themselves as a chapter (to be) and adopted the unofficial chapter name of “Quad Alpha”. Furthermore, the Quad Alpha chapter developed several themes that would govern and define the chapter; Friendship, Family, Fraternity and “We are the Working Chapter.” July 2011 Tuesday, July 12th, the members of Quad Alpha made equal payments in the total amount of $1,500 to satisfy the cost of establishing a chapter and their business plan to 3rd District Representative Anthony Knight for consideration and submission to the Grand Council during the Centennial Celebration in Washington DC. On July 20, 2011, a certified check in the amount of $1,505 was submitted to the International Head Quarters (IHQ) of the Omega Psi Phi Fraternity, Inc. as a requirement for the formation of the Loudoun County Chapter which was how the to be chapter was officially recognized at that time. Wednesday, July 27th, Dr. Andrew Ray and the Grand Council approved Form 9A and the business plan and assigned the name of Sigma Mu Mu to the new chapter as the last order of business during the fraternity’s Centennial celebration in Washington DC Several members of the newly formed chapter congregated at the Mayflower Hotel in Washington DC to celebrate the birth of the Sigma Mu Mu chapter. They celebrated with brothers from various chapters including Beta, Phi Kappa Kappa, Nu Nu, and more.

Saturday August 13, 2011 the Sigma Mu Mu chapter held its first official chapter retreat at the International County Club in Fairfax, VA.  Various chapter members discussed aspects of the chapter such as how the chapter would operate to achieve the mandated programs during the first year.  A straw man budget was presented and chapter dues were discussed. At the retreat, the chapter elected its first slate of officers: Basileus- Shawn R. Lacey Vice Basileus- Cordell Charleston Keeper of Record and Seal- Michael Williamson Keeper of Finance- James C. Moore Chaplain- James Hackley Keeper of Peace- David Henry Jr. Parliamentarian- J. Kevin McIntyre Chapter Editor- Michael L. Bennett Saturday August 27, 2011 the chapter held its first official outing which was a Chapter Cookout for the charter members and their families.  This event had three purposes, first to provide members the opportunity to fellowship and celebrate the chartering of the chapter, to acknowledge and Thank family members for supporting charter members; lastly this was the first reclamation program as known Omega men in the area and their families were invited to participate and fellowship at this event.

The monthly chapter meeting began in November of 2011. The chapter meets on the 2nd Monday at 7:00 PM.